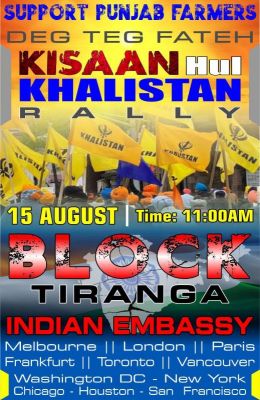 While GOI is preparing to launch the yearlong celebrations at the consulates abroad on the upcoming I-Day, secessionist group “Sikhs For Justice” (SFJ) gave a call for blocking of Tiranga on August 15th at the Indian Missions in UK, France, Germany, Italy, USA, Canada and Australia.

In a video message, SFJ General Counsel Gurpatwant Singh Pannun stated that while farmers and their families are mourning the deaths of the protesting farmers, Modi Government is launching a yearlong festivity to mark the 75th year of independence.