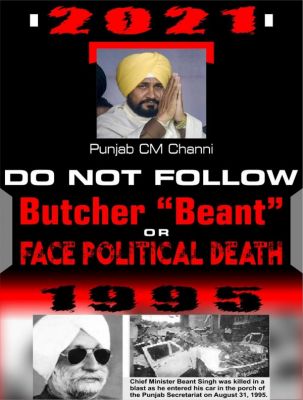 Incumbent Punjab CM Channi started his political career as protégé and snitch of Beant in 1992 while IPS Sahota was handpicked by the then DGP Gill to carryout out the policy of torture and fake encounters of Khalistan activists.

Citing the assassinations of CM Beant and PM Gandhi, SFJ General Counsel Gurpatwant Singh Pannun in his video message reminded Channi-Sahota duo that “use of state violence to crush a political movement only begets a cycle of violence which consumes its own creators as well”.

Khalistan Referendum Voting is due to start on from London UK on October 31st, the day Indira Gandhi was gunned down by her Sikh body guards to avenge the June 6 1984 Indian Army attack and desecration of Sri Darbar Sahib.

In Punjab, SFJ is planning to hold Khalistan Referendum voting parallel to the 2022 Punjab Vidhan Sabha Elections posing a challenge for administration and political leadership.